Festivals are a great way to connect with the local culture while traveling. There are few better ways to feel at home in a new place, than sharing the joy of a festival with feasts, happy people, and local customs. All these thrills are packed together in one place and time. Here’s a calendar of amazing festivals and events in India, along with the best locations to experience them. We would recommend trying to overlap your trip to India with one of these, and to join the festivities!   January Uttarayan or the famous kite festival of Gujarat is when everybody finds a spot on high terraces and open grounds to show off their kite flying skills. On this day, the sky is filled with a display of impressive kites. Take a trip to the kite market to pick your flying weapon of choice and join in. Where? Ahmedabad, Gujarat

Uttarayan Kite Festival – Ahmedabad, Gujarat
Photo Courtesy: Meena KadriÂ CC BY-SA 2.0
Republic Day is a celebration that the whole country partakes in. The national holiday begins with a flag hoisting ceremony and other events in every apartment building and school. The Republic Day parade in New Delhi is a spectacular, one-of-a-kind showcase of the country’s heritage. Where? New Delhi

Republic Day Parade – New Delhi
Photo Courtesy: JeremyRichards / Shutterstock.com
February Turtle Festival is a gem for wildlife lovers. A small village in coastal Maharashtra turns into a conservation haven for Olive Ridley turtle hatchlings that are safely released into the sea. Come be part of these magical moments and experience living in a small Indian village. Where? Velas, Maharashtra.   March Holi is the festival of joy and color. Be surrounded by colors, water balloon fights, a local drink called bhaang, and lots of music. Where? All over India, but most famous in Varanasi. 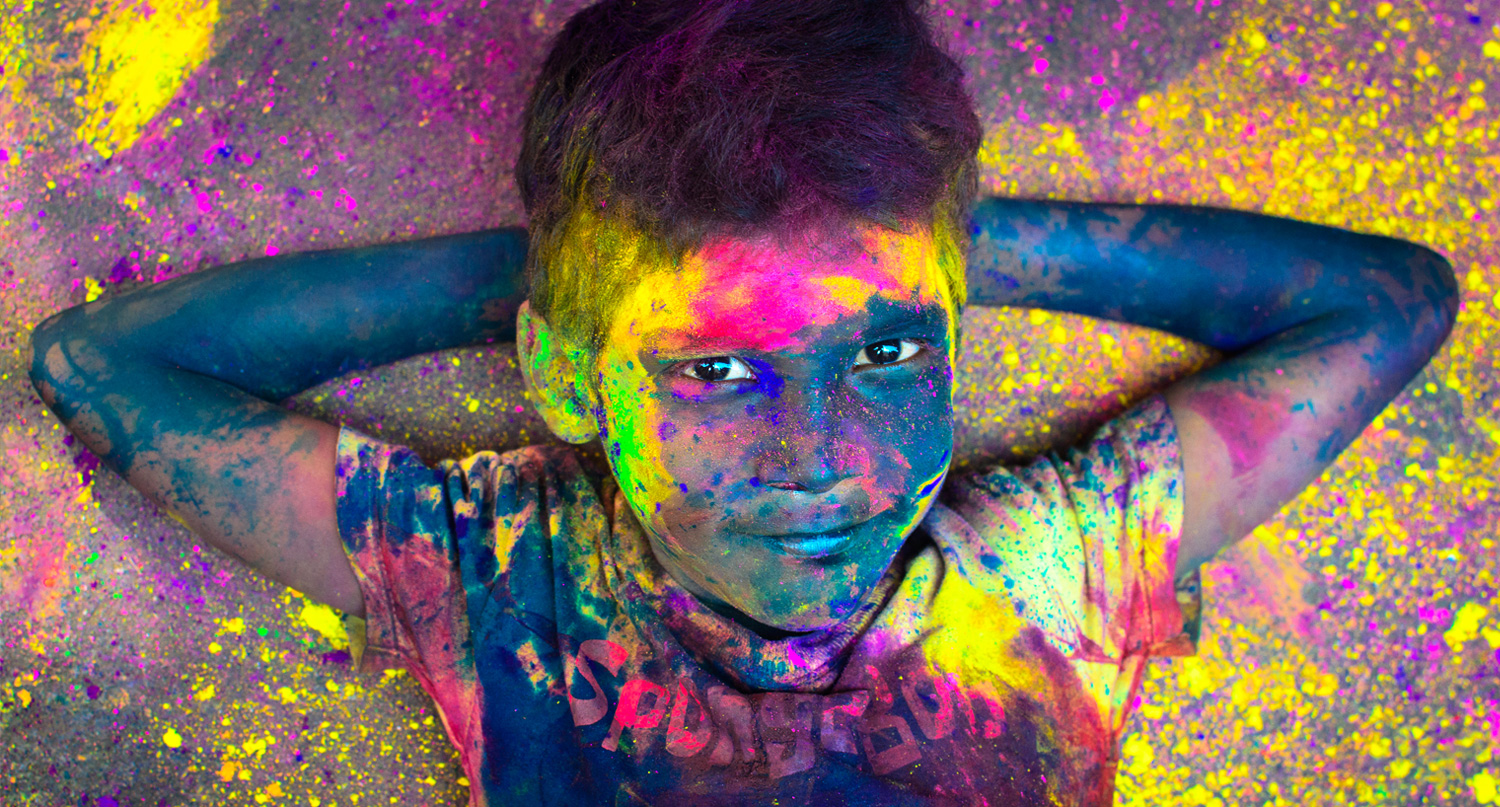 Colors of HoliÂ
International Yoga Festival is a festival in yoga, meditation and healing workshops. With the gorgeous Himalayas in the backdrop, there’s few better places to learn about this ancient Indian philosophy.Where? Rishikesh   April Vaisakhi is a Sikh harvest festival celebrated with much pomp and show in Punjab. There will lots of fresh food, folk music, and fairs. Where? The Golden Temple in Amritsar   May Buddha Jayanti – Intrigued by Buddhism? Even non-believers will enjoy this festival that radiates peace and calm. It commemorates the birthday of Lord Buddha and celebrations include prayer meets, discourses, and group meditations. Where? Bodhgaya

Buddha Jayanti Celebrations – Bodhgaya
Photo Courtesy: Grigoris Siamdis / Shutterstock.com
Ganga Dussehra is a holy festival that celebrates the most sacred river in India the Ganges. A dip in the river on this day is said to wash away all your sins. The wonderful city of Varanasi turns even more colorful and the energy is unmatched. Where? Varanasi

Ganga Dussehra Festival – Varanasi
Photo Courtesy:Â saiko3p / Shutterstock.com
June Hemis Festival must not be missed if you’re in India at this time of the year. Set in the distant land of Leh, the journey to the festival is as great as the joyful celebrations. The streets are filled with traditional music, colorful masks, and a handicraft fair. Where? Hemis Monastary, Leh

Hemis Festival – Leh
Dharamshala Film Festival is a great way for film lovers to watch movies that talk about consciousness in cinema. This chilly mountain town is a perfect escape from the Indian summer, and who knows, you might even bump into the Dalai Lama. Where? Dharamshala   July Champakulam Boat Race is the time when this pretty town bursts into a frenzy of color and energy. You will watch in utter amazement as teams of over a 100 men row in synchronization as they race to the finish. After the event, you can cool off at the paddy fields or simply soak in the sight of the beautiful backwaters around town. Where? Champakulam, Kerala

Snake Boat Races – Kerala
Photo Courtesy: CRSHELARE / Shutterstock.com
Rath Yatra is a huge procession attended by millions of devotees of the deity Jagannath. Towering chariots hold the idols of the deities as they paraded around town. The elaborate decorations of these chariots are a sight to behold. Where? Jagannath Temple, Orissa   August Ganesh Chaturthi is a joyful festival celebrated for nearly two weeks. Stalls with statues of Ganesha, the God of new beginnings and good fortune, are set up all over city. Colorful processions filled with music and dance carry these idols to the sea every few days. Where? Mumbai

Ganesh Chaturthi Celebrations – Mumbai
Photo Courtesy: CRSHELARE / Shutterstock.com
Independence Day is when you can catch a glimpse of the massive parade in New Delhi and follow up with cultural events through the capital city. Indulge at food stalls and music gigs set up just for this day. Where? New Delhi

Independence Day Parade – New Delhi
Photo Courtesy: JeremyRichards / Shutterstock.com
September Onam is a harvest festival celebrated in Kerala. It is a delight to visit a home in Kerala and watch them decorate their entrances with colorful designs made of rice flour and flowers. Don’t forget to sample the delicious and elaborate Onam Sadya or the Onam feast served on a banana leaf. Where? Kerala   Navratri is the time to get your dancing shoes on. This nine-day festival consists of feasts and dancing every night. Get out your most colourful attire and learn the traditional dance steps before you join the fun. Where? Ahmedabad, Gujarat

Navratri Festival – Gujarat
Photo Courtesy: Pete Burana / Shutterstock.com
October Durga Puja is when beautiful statues of Goddess Durga can be seen all over West Bengal. For an entire week, the streets are filled with music, delicious food, and women in colorful saris. It’s hard to be in a bad mood with so much joy around. Where? Kolkata

Durga Puja – Kolkata
Photo Courtesy:Â Roop_Dey / Shutterstock.com
Mysore Dussehra is a ten day long festival in the city of Mysore. It begins with a dramatic procession of heavily adorned elephants along with the Maharaja of Mysore. The gorgeous Mysore Palace is lit up and the entirety of this heritage city partakes in the celebrations with cultural events and performances. Where? Mysore   November Pushkar Camel Fair is a marvelous experience in the desert town of Pushkar. An astounding number of camels, usually close to 50,000 are brought for the trade fair. The sand dunes are transformed into a gigantic fair ground with acrobats, giant mustaches, and colorful turbans. This fair is worth a detour. Where? Pushkar, Rajasthan

Pushkar Camel Fair – Pushkar, Rajasthan
Photo Courtesy: neelsky / Shutterstock.com
Diwali is undoubtedly India’s biggest and most celebrated festival. Every city is dolled up with lights and millions of little oil lamps. Colorful firecrackers fill the night skies and everybody is in a great mood. Be sure to indulge in the delicious sweets made especially for this occasion. Where? All over India

Diwali – The Festival of LightsÂ
Photo Courtesy: Amlan Mathur / Shutterstock.com
December Hornbill Festival is the perfect place to understand and meet the tribes of northeast India. Over 20 tribes from across Nagaland and the northeast come together to showcase their dance, music, food, and art. A rare opportunity that must not be missed. Where? Kohima, Nagaland

Hornbill Festival – Kohima, Nagaland
Photo Courtesy: VikramjitK / Shutterstock.com
Rann Utsav is another cultural gem. Live in a comfortable tent in the desert and take in magnificent views of the salt flats. The atmosphere is eclectic with dance, song, and delightful handicrafts for sale. Where? Kutch, Gujarat