Massive canoes, crowds cheering, several hundred rowers chanting in unison as they race across the river All in God’s Own Country: Kerala.

During the harvest months of Onam (August and September), Kerala comes alive with energy, enthusiasm and an elaborate display of itâ€™s ancient history. It is during this auspicious month that the region celebrates its centuries old tradition of Vallam Kali (Boat Races). An ancient sport, claiming to date as far back as 300 B.C, Vallam Kali (Boat Game) is perhaps the largest team sport in the world. With at least a 100 men in each 120 ft longboat, this title seems justified. While this sport attracts visitors from around the world, it holds a lot of historical and cultural significance for the locals. Races include various types of traditional long boats, but it is the Chundan Vallam Kali (Snake Boat Race) at Aranmula which is the largest and most popular.

What is a Snake Boat?

It is said that the origin of the large Snake Boats dates back to the14th century when King Devanarayanan of Chembakassery commissioned a unique war boat that could accommodate a large number of soldiers and yet be quick and stealthy. The result? A gorgeous vessel that holds a hundred or more rowers. About a 100 to 130 feet in length, the curved helms of these boats resemble the hood of a cobra. Hence, the name Snake Boat. 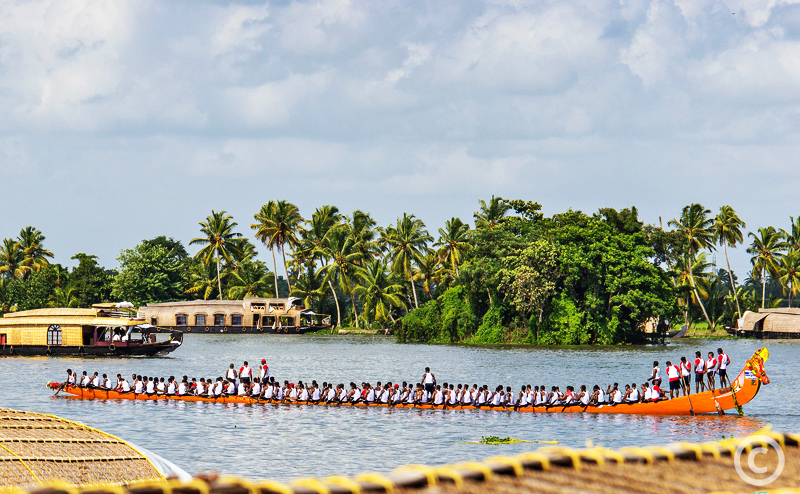 Traditionally, each boat belongs to a particular village. It is believed that the Chundan Vallam is the divine vessel of Lord Vishnu. These boats are cherished and revered by the locals. Polished with fish oil, coconut ash and eggs, these boats are lovingly decorated and dressed up for the races.

Commanded by the Village Leader, these boats are controlled and manoeuvred with the help of a 12 foot long rudder-oar. 64 oarsmen sit in two rows along the length of the boat while 25 singers sit in between them. Rowing occurs in sync with the Vanchipattu (boatmenâ€™s song). Towards the back of the boat, on a platform stand 8 other men who represent the Gods that guard the 8 directions. The rowers can apparently produce 90 to 120 strokes per minute!

Vanchipattu – The Boat Song. It is a phenomenon in itself. With its own distinct history, the boat song is the most important component of the boat races. Apart from the rowers and the boats themselves, of course. While an attempt at understanding or even pronouncing the words of these songs would require an extended stay in the region, it is imperative to acknowledge the energy that resonates as a result of the intricate presentation of these songs. Simply put; the loud, energetic singing by hundreds of rowers – each performing his part perfectly, at just the right moments – is, quite literally music to oneâ€™s ears. The overall emotion that is evoked is astounding. While the Snake Boat races are a popular tourist attraction, they are also a part of the local religious practices. The festivities of these races include elaborate prayer rituals in veneration of Lord Vishnu.

In Aranmula, the annual Snake Boat Race is a sort of religious ritual in itself. The popular narrative for its origins is something like this: Once upon a time, a Brahmin vowed to offer an elaborate feast at the Aranmula Parthasarathy Temple on the occasion of Onam. The boat delivering the said feast was attacked by thieves. Fortunately nearby villagers came to the rescue in their own snake boats, drove the thieves away and accompanied the Brahminâ€™s boat to the temple. To celebrate the triumph of good over evil, a practice of bringing the offerings in the form of a boat race was established. Even today, the commencement ceremony of the races involves a procession of boats bringing the feast offerings across the river to the Parthasarathy Temple. If getting to Aranmula is not conducive with your South India travel plans, the more tourist-focused Alapuzha (Allepey) can be the perfect to experience these traditional races. Apparently, Indiaâ€™s first Prime Minister enjoyed this annual event so much that sometime in the 70â€™s he established the Nehru Cup Boat Race Tournament to keep the sport alive and popular. At this regatta, one can enjoy not just the Snake Boats but also several other traditional and historically significant boats. Did we mention that pretty much all of these massive vessels are hand-crafted?

– Aranmula Vallamkali : September 18, 2016 – Nehru Trophy Boat Races : August 13, 2016
– These events can be fairly crowded and like any sporting event, emotions tend to run high. Be sure to make prior arrangements through your India Travel Specialist. – The Temples in this region usually have a strict dress code. It is best to avoid wearing shorts and sleeveless clothing if you plan on visiting the religious ceremonies.

– The best viewing spot would be close to the finish line. – Use Sunscreen – Donâ€™t forget your sunglasses Immerse yourself in the energy of this sport to have an experience of a lifetime.

Want to know more about Onam? Here is a great guide. The dates of the festival on the guide are for 2015 but everything else is still true!

Do you like timing your travel so you can participate in local festivities? Would you like to know more about the different festivals of India? Check out this nifty calendar…